Hello there!
As promised I’m back to show another sewing project. This time, big news, it’s for my man! 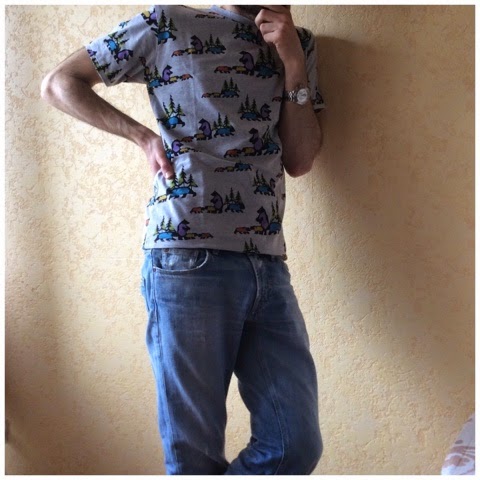 To be honest, I like a lot sewing for him, because he always has some pungent remarks on how to improve my projects. I understand this might sound as a pain, but I actually enjoy that he listens and comments on my sewing rambling. And most of all, I am so glad he appreciates the beauty of something unique made for him, and made by my little hands.
Last week we were out for dinner with friends and he proudly said “She made me a tshirt from scratch!” Doesn’t make any sense to me, but all the other guys were amazed and repeating “Wow, from scratch!”
So the big news is not sewing for him, but have him pictured! He’s such a poser (and the pictures prove it!), but I couldn’t get him to show his face. Fair enough, we’ll negotiate again when I sew him a nose cover or a pair of glasses. Till then, I’m ok with the present agreement. 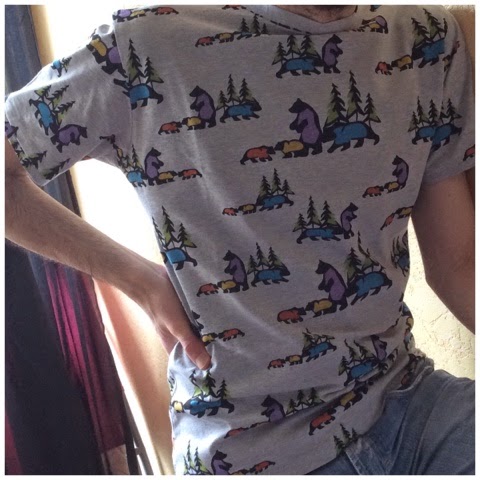 This is the second tshirt I have made for him. The first one got to be worn on a weekend trip since it was meant to be a pajamas top. After that weekend, it got accidentally forgotten despite my reminders, and I think we threw it away when he was packing. Before getting rid of it, I managed to have some constructive feedback about it: first of all, the fabric was a very think jersey who couldn’t hold any shape: for me was ok for a pajamas but no, he wanted stiffer jersey. Then the neck was too wide, and maybe there was something wrong about the sleeves… Basically he was just annoyed by the light jersey. 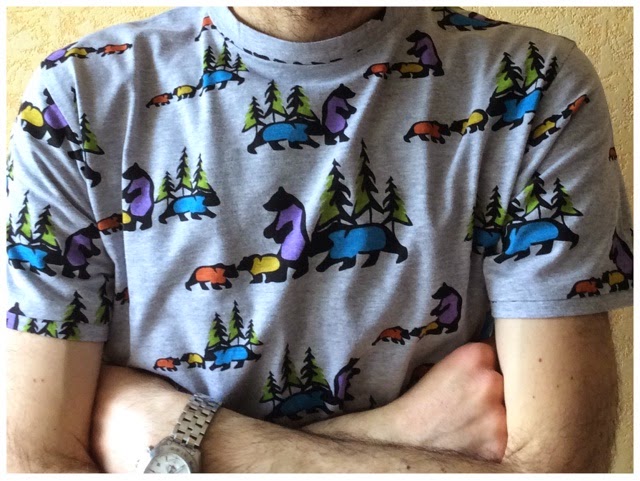 So I bought this amazing jersey at Arrow Workshop, after he choosed and approved the print and actually got extremely enthusiastic about it. Good news is that the jersey is much stiffer, bad news it has no elasticity. Enters the horrible neckband. I am ashamed of it, but the boy liked it anyway, saying that next will be better. I’ve told you he’s cool!

On the other hand, I’m super proud of the sleeve bands, because the stiff fabric makes them just the way I like them. 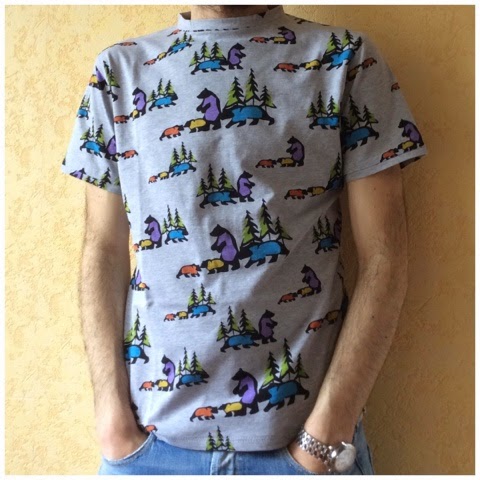 One small detail that irritates me is that the bears appear to be sliding sideways. If you don’t notice it’s ok, but once you notice you can’t ignore it. I take full responsibility of it, because the print was not perpendicular to the grain, so I had to choose between an off grain tshirt or sliding bears. I went for an arbitrary compromise: for the back I went slightly in favor of the print, for the front I opted for a more correct (yet still wrong) grain. I know I should have done the other way round, but I was disappointed about the off-grain print. Anyway, he didn’t even notice when he tryed it on, and when he is moving around the bears don’t appear to be so drunk and glissants. 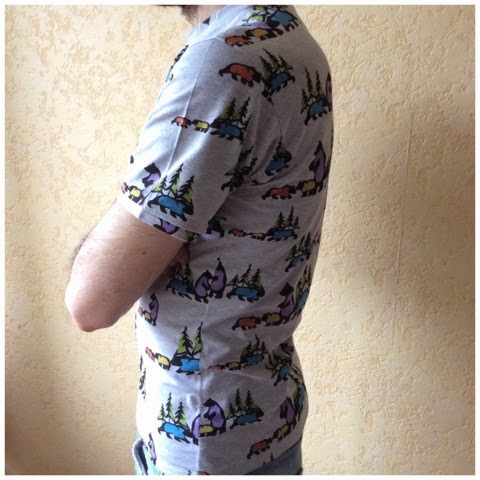 The pattern is copied from one of his favorites tshirts, only difference is that his favorite is made of a very elastic jersey. I am that inexperienced I didn’t think of this detail. Well, I guess I will use this pattern again for very extensible jerseys, and trace a roomier pattern from a stiff tshirt he likes. So I will have two patterns: more fun and choices for me, more tshirts for him. Win-win. 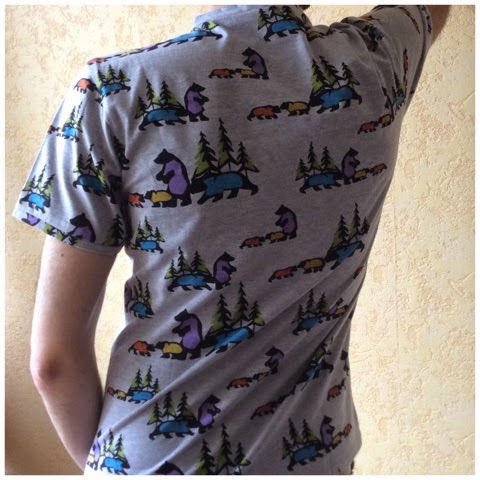 So that’s a wrap for my first blogged project that features my man. I enjoy sewing for him and I will do it again for sure, and I don’t mind the notes and remarks. What about you? Have you ever tryed sewing for your dear one? And how do you handle his/her remarks?

Posted in For men, Tops